This in an update on a prior series from Oct. ’16 on four beat gaits.

First, let’s talk about an anomalous form of the gallop whose existence is still, with todays slow motion video technology, debated. That is the double suspension gallop. In this, there are two moments of suspension, similar to a running greyhound. The hoof-falls would be hind, hind, suspension, opposite fore, fore,

suspension.  Secretariats immense stride is sometimes credited to his use of this gait. His winning photo from the Belmont Stakes shows him in a strange position, with all feet off the ground but legs outstretched. His outside fore hangs slightly, much like the dog in the photo above. It looks so strange that I, like many, wondered if it was a glitch. Then I realized that foreleg, and the opposite hind, could still be in the process of moving forward. He is on the left lead, with his left (inside) fore about to land. So I looked around to see if this glitch was repeated anywhere.

I looked at some “most obvious suspects.” California Chrome. American Pharoah. Cigar. Zenyatta. All had huge closing strides– and acceleration within the gallop is where the double suspension seems to show– and none of them seem to exhibit this gait. And 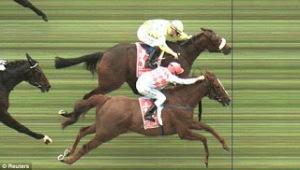 then I stumbled across this photo finish from the 2011 Melbourne Cup.  Red Cadeaux, the chestnut on the inside, is in almost the exact strange position that Secretariat was in at his Belmont finish. The photo IS distorted– the larger version shows one horse with a ridiculously large hock– but the distortion seems greatest the furthest from the finish line. And there are now a handful of interesting non-finish line photos floating around, like 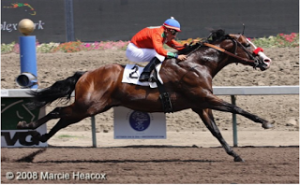 this Quarter Horse Mr Premier LV. This photo could be the moment after the phase shown above. The left fore has just touched the ground, but both hinds are already well in the air. The double suspension gallop’s effects on speed and soundness, as well as it’s possible heritability, are all conjecture at this point, as is its very existence. Finding evidence of horses galloping with out fulling weighting the diagonal at the same time is easy. Evidence of a second true suspension is inconclusive. Studies are ongoing.

Now, back to the greyhound. The greyhound tends to employ a rotary gallop, with the hind-fore pair being lateral (usually the outside pair). The second non-standard hoofbeat pattern is what is often called the “gaited canter,” which is a rotary canter. The hoofbeats are hind, lateral pair, fore, which the pair occasionally exhibiting a slight break. It is often seen as just another crosscanter (i.e., disunited, with the fore and hind legs on opposite leads), but the tendency of gaited horses– especially those who exhibit lateral gaits– is strong, and the pairing of the lateral in the canter is not generally seen in other crosscanters. It is not a gait I would encourage, but for these horses it appears to be “natural.” I find that strengthening these horses diagonal gaits, if any, a great deal of working on circles, and is possible introducing haunches-in, helps to develop a standard canter, which is both more comfortable and better for long term soundness.

This in an update on a prior series from Oct. ’16 on four beat gaits.

A while back I wrote a bit on four beat canters & lopes. In a footnote at the bottom, I mentioned the four-beat gallop as well as a non-standard gait that is sometimes four beat: the break.

We’ll take a quick tour of our understanding of this “gait,” seen most often out of the 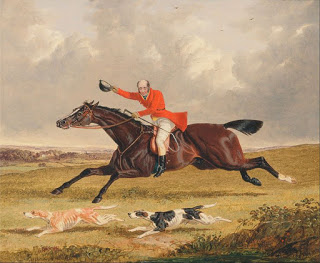 starting gate, but first lets look at the related gallop. Prior to Muybridge’s 1870’s photographic study of equine locomotion, running horses were depicted stretch out, both hinds together behind the horse and both fore together in front of the horse, like this:

And then, of course, came Muybridge’s stop motion photography study. This instantly “disproved” the common depiction, which quickly went out of fashion.

And that was that. Right? Well…not quite. In the last decade or so, we’ve revisited this idea with new film technology. We need to add a few caveats. The frames above are of a mare galloping at the Palo Alto racetrack in California in 1878. The gallop exhibited by this mare is the most common way of going for horses in that gait, with the footfalls being hind, hind-opposite fore, fore, followed by a moment of suspension with all four legs curled in towards the center of the body. It is not, however, the only footfall pattern for the gallop, and the gallop is certainly not all we see from modern racehorses. The break is likely the root of the splay legged depictions of the gallop. Earlier versions include: 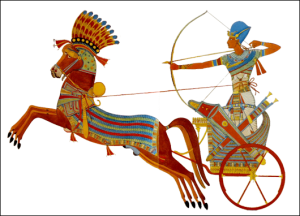 This is something that was “disproven” by Muybridge, but it turns out actually happens. The gap between the hind pair and the front pair becomes much more pronounced, and the hinds occasionally push off together (though often still landing a half beat apart).