Skip to content
Search
Close
While there were horses in the Americas well before Figure (The Justin Morgan Horse), and even earlier ‘breeds’ developed in what is now the United States (the Narraganset Pacer comes to mind), Figure’s timely birth along with his astounding versatility, and the all-important ability to pass on his traits, are what allowed the Morgan Horse to become the first truly American (as in U.S.) breed. This stud ad was recently posted by The Morgan Horse Museum. The ad is by Justin Morgan himself, when Figure was about five years old.
There are two things I’d like to point out about this ad. This first is the fee- $1, for a “single leap,” no guarantee. While 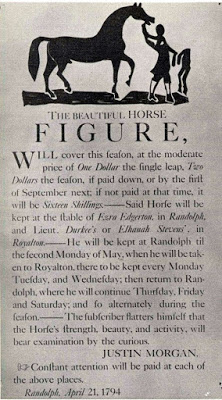 this seems like a ridiculously tiny fee to us, “full-blooded” (i.e. Thoroughbred) stallions of the time often stood for only $5, and only imported champions were likely to command more than $25. Figure was of course not full blooded, but rather an unregistered and unregisterable “sport,” and at this point still rather young. So with only a couple of seasons of accomplishments, a scant handful of foals on the ground (with possibly none ready to be ridden), and his “strength, beauty, and activity,” he merits a full dollar fee and being stood in two towns in the same season (a common practice for quality studs).

The second, and related, item is the complete and utter lack of pedigree information. While most stud ads contained at least sire and damsire, Justin Morgan is silent. Given the currently accepted theory that his sire was the stolen True Briton, and his dam a mare by Diamond (great grandson of Cade, via Wildair), this lack is startling.* I have long favored the Dutch theory, most famously supported by the late great Jeanne Mellin, and this ad’s peculiar silence further suggests that Figure was not largely thoroughbred.**

2 thoughts on “The Origins of America’s Original Horse”